I had a job interview once, in which an employer for whom I’d previously worked said

“sorry, Andrew, there’s not much work around Montreal this year – but if you want, I can send you to Resolute Bay”.

With the supreme confidence that only a foolhardy 19 year-old can have, I said
“Great – when do I start?
And where the f___ is Resolute Bay?”

Resolute as seen on a nice, warm day. 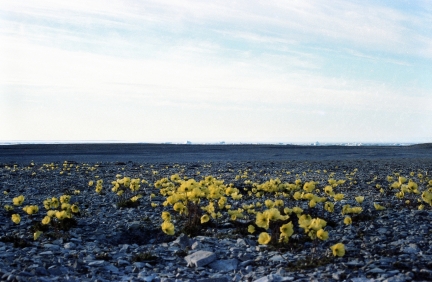 This end up!
a resolute Andrew Bryant at Resolute 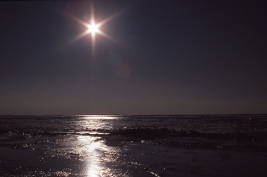 Photographically speaking, two important things happened during this trip.
My ancient Praktica died, so I bought my first “good” camera by mail order from Yellowknife – a Canon AE-1.
This is whalebone and arctic poppies, Resolute Bay, NWT, 1979

Alas, I could only afford a 50 mm standard lens for it.
Oh well, here’s an Arctic tern – about the only usable wildlife photo I got.

The 2nd photographic change was more important – I began to shoot slide rather than negative film.
Those good old Kodachromes have stood up pretty well over time.
Here’s the skyline at Resolute Bay, NWT, 1979

This was my favorite photographic vantage point.
Andrew at Resolute Bay, NWT, 1979

It was hardly tee-shirt weather, but I was young…
Yours truly at Resolute Bay, 1979 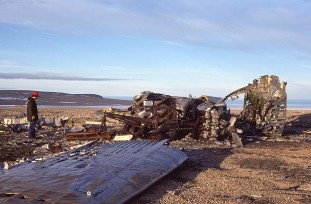 Fog rolling in over the sewage lagoon, Resolute, NWT, 1979

Yours truly in the back of a DC-3, on the way to Mould Bay, NWT. 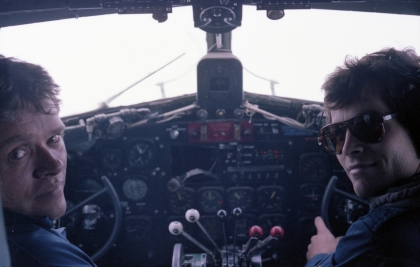 on the way to Mould Bay, NWT.

Nice flying conditions.
We had to shut down an engine en route, but the pilots (and the DC-3) took it in stride. 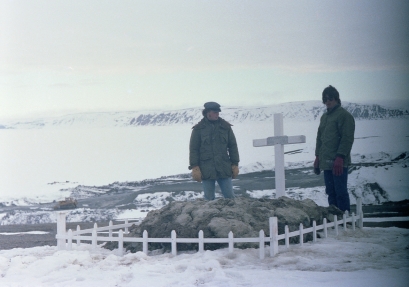 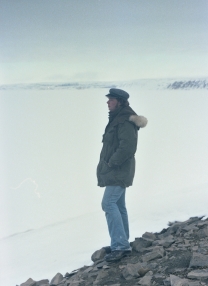 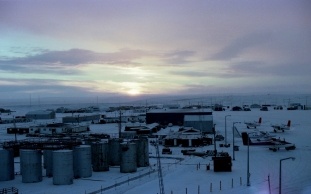 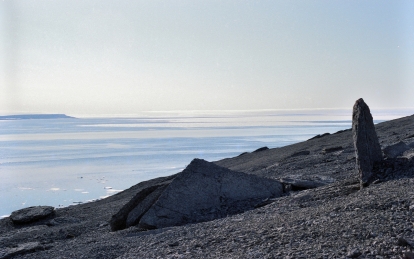 Interesting rock formations at Resolute, with Griffith Island in the background.

First glimpse of Ellesmere Island on my way to Grise Fiord 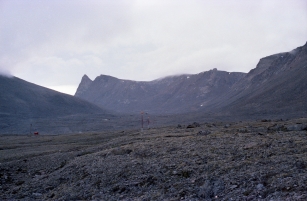 My job was to repair the airstrip lighting. 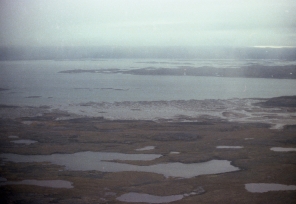 The Solaris and Mermaid in Resolute Bay, 1979.
The Mermaid made the east-to-west crossing successfully, taking three years to do so.

Tómas Tómasson abord the Solaris in Resolute, 1979.
This ship ran into problems with pack ice a few days later, and Tómas and his skipper Axel Czuday got back to Iceland by the skin of their teeth, having been rescued by the icebreaker Labrador
I remained oblivious to the story until I scanned this image and sought to identify the boat! 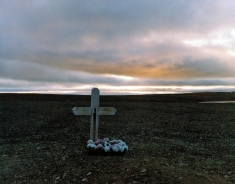 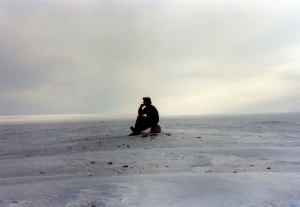